The Soul Master is a supporting character and the cheerful mentor of Ziggy who trains Ziggy to become a Song Summoner. He lives at the Hip-O-Drome and can create tune troopers by using downloaded music on the IOS or Android for Ziggy on his journey.

When the Mechanical Militia was about to kill Ziggy and held Zero captive. The soul master saves Ziggy from the mechanical soldiers and summons a soldier classed tune trooper called Her Majesty to assist him to slay the robots and drove Number 42 and Full House away. The Soul Master then explains to Ziggy that he is a conductor, and can summon and control an army through the music that is on the user's iPod. After 5 years of training, Ziggy starts his quest to find his little brother.

He is only playable the tutorial sequence of the game. He is classified as a platinum ranking trooper and a mage classed. 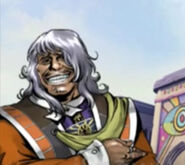